The Adventures of Queen Becky 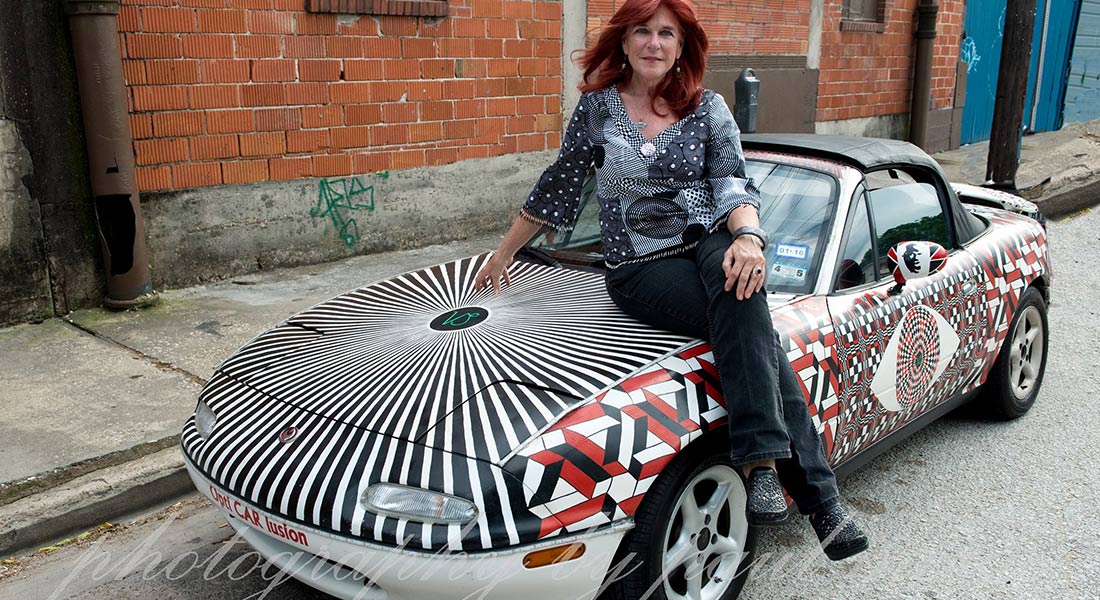 Opti Car Lusion is painted with an array of Optical Illusions.

I have been driving Art Cars since 1997.  Driving an Art Car is like driving in a parade all of the time.  Everyone wants to wave, say hi and honk.

This plain white ghost like Mazda Miata came into my possession in 2008 while living in Mt. Dora, Florida.   I did not paint it because it was nice being incognito for a change.  No one took a second look.  It only bothered me when I saw another white Miata because I was not used to looking like anyone else.

Then Rex  Rosenburg, an Art Car Artist from Kansas, came for a visit.  We met long ago at his first Art Car Ball. The day before he planned to head home, he walked into the kitchen, put his hands on his hips and declared, "It is just not right for Queen Becky not to have an Art Car.”  He insisted on not leaving Florida until I put some paint on that car.  My first thoughts were that I did not want to paint my car, it was nice not being the center of attention for a change. Once The Creative Juices began flowing,  the paint and brushes came out and the beginning of Opti Car was born.

Opti Car Lusion is the Art Car that I have driven the longest. 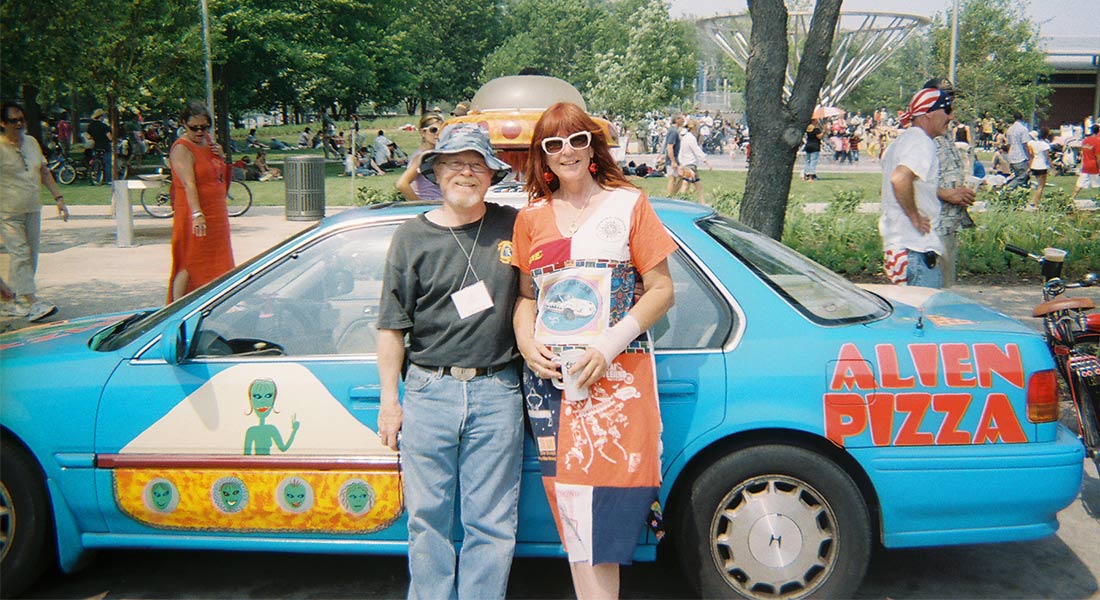 Alien Pizza was designed as a delivery vehicle for Alien Pizza Restaurant in Leesburg, Florida.  “The best pizza in the universe.”  The Alien Pizza UFO on the top of the car is made from part of an oven roof fan and a salad bowl.  When the Car was driven in the Houston Art Car Parade, a spectator called the phone number on the side of the car to order a pepperoni pizza. The problem came with the outrageous delivery fee for delivering the pizza from Florida to Houston.  The door is painted with the artist driving the Space Ship while my four sons are looking out of the windows.  Standing next to me is Rex Rosenburg, my inspiration for Opti Car Lusion. 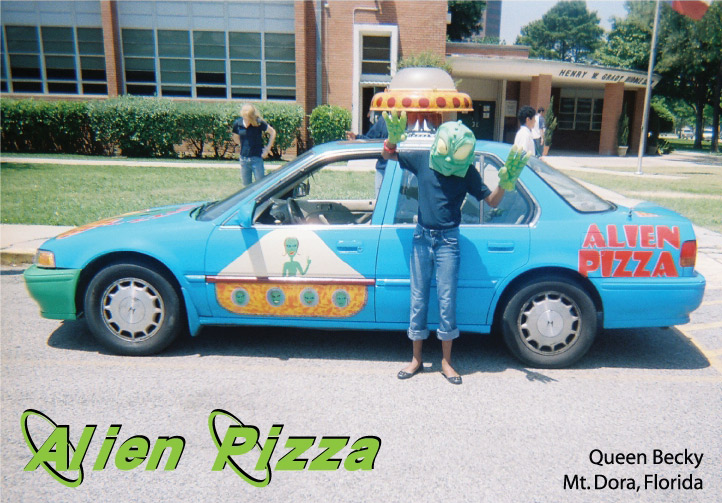 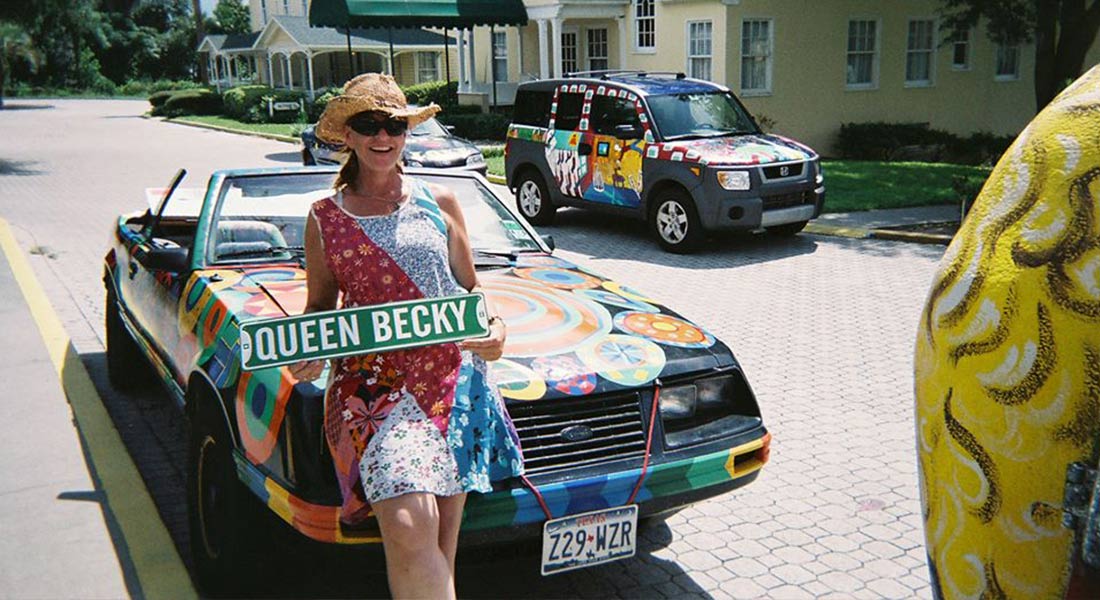 Wheels of Imagination.  This convertible Ford Mustang was bought for $5.  A friend of Art Car Artist, Jeff Townsend, wanted to get rid of the car from their driveway. Jeff gave me a call,  "Do you want another Mustang?"  Of course, I did.  The car was not pretty, but the engine ran. And that is all I needed. The original design is the hardest part of decorating an Art Car.  As a seamstress, I went to the fabric store for ideas.  There are so many beautiful colorful fabrics with fantastic creative designs.  Finally, I see one that reminds me of colorful hubcaps.  I started with designs from the fabric, then began coming up with ideas from other circular objects.  One design came from an Indian drum skin.  It was the crow holding back the storm so the other birds could fly to safety.  Another was the phases of the moon.  I had never realized how many circular designs there were in the world. 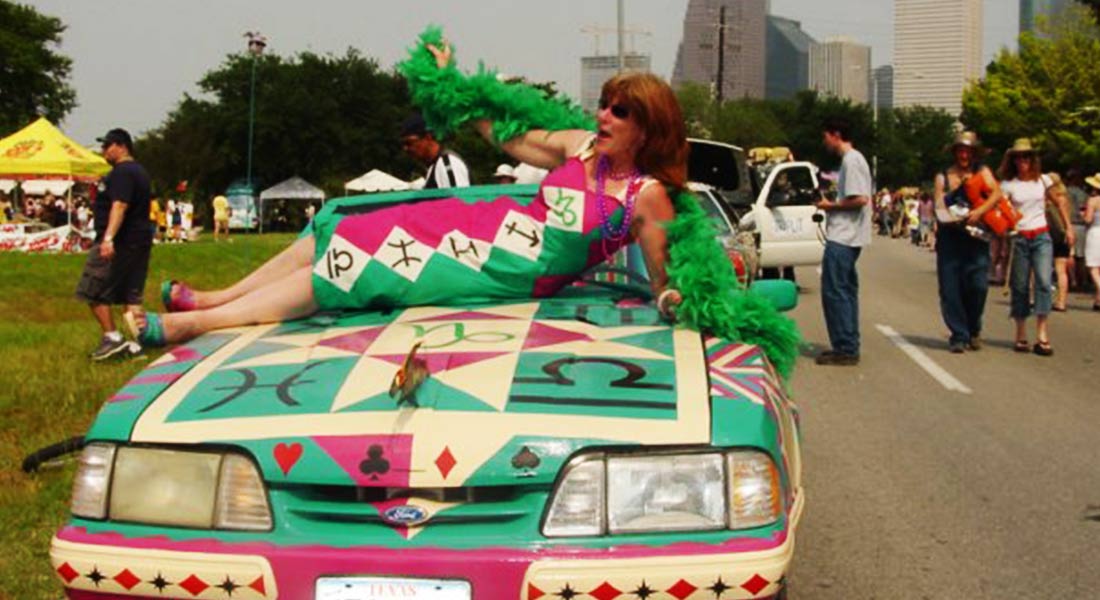 "My Life" was my first Art Car.  The convertible Ford Mustang was my favorite car.  The color was garnet, the same as my birthstone.  Then the hazards of living in the fourth largest traffic congested city began.  In one month my car was hit three times, none of them my fault.  The body repair men gave me a $3500 estimate to make my car look like everyone else's boring car.  I don't think so.  It was time for an Art Car.  That was when I was introduced to Matt Slimmer, "Boat Car Matt".  He told me what kind of paint to use and introduced me to the Art Car Community.  Once again the design was the hardest.  A friend I met at work was working for Houston's street department.  He cut out vinyl designs, that were supposed to be used for street signs, into funny or different designs.  I started scarfing up these vinyl images for the new Art Car.  Now for a background for these designs.  I have always thought in geometric and straight designs, so I chose quilt patterns.  The hood was the Ohio Star quilt pattern.  It gave me space to paint mine and my four son's zodiac signs.  The name, "My Life"  came when attending my first World Art Car Day (WACD).  On the trunk I was painting diamonds with my hobbies in them.  Someone walked up and asked, "What is the name of your car?"  I looked up and said, "My LIfe."  Little did I know that Art Cars would become my life.  Once I started, I was hooked.